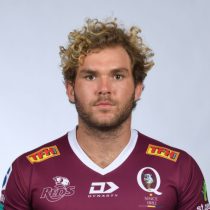 With his father Sam Scott-Young earning 7 Test caps for the Wallabies, Angus had already proved himself by 2016, having earned two International caps against New Zealand at the Oceania Rugby U20s Championship on the Gold Coast.

The Reds announced in July 2016 that they had signed the talented flanker and he made his Super Rugby debut off the bench in the Reds’ Round 3 win over the Brumbies at Suncorp Stadium.

He was handed the captaincy for Bond University Queensland Country during the NRC 2019 season before extending his contract at Reds through 2021.

Leading into the 2020 Super Rugby season, he had 13 Reds appearances.

After earning his 50th caps for Queensland in 2021, the backrow signed a new deal to remain at Ballymore through 2022.