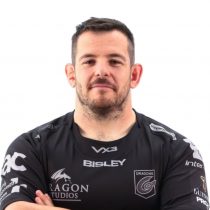 Exeter-born Jarvis is a product of the Bath Academy and has been capped by England at Under-16 and U19 level but is Welsh-qualified through his grandmother who came from Merthyr Tydfil.

Jarvis worked his way through the youth ranks at Bath RFC and racked up 49 caps for the side in the process. The Welsh Union were alerted to Jarvis’ Welsh eligibility, for whom he qualifies through his Welsh grandmother, and facilitated a move to the Ospreys for Jarvis to increase his international chances.

Jarvis made the move to Ospreys in 2011 and test debut coming a year later as he started against Argentina in November. Jarvis was a regular for Wales under Warren Gatland and cemented a place in the New Zealanders' 2015 Rugby World Cup and made three appearances for the side at the tournament.

After four seasons at the Liberty, Jarvis made the switch to France signing for TOP14 club Clermont ahead of the 2016/2017 season. He lifted the Top 14 in his first campaign in France and just missed out on the Champions Cup winners medal in the 2016/17, as the French outfit were defeated by Saracens in the Murrayfield final.

Following the conclusion of his contract at Clermont, Jarvis signed a deal to return to Wales joining the Dragons on a two-year contract.