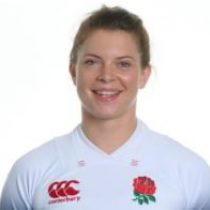 Dumfries-born Scott, was educated at Keswick School, Sedbergh and Northumbria University where she obtained a BA in History and Politics and an MSc in Sports Coaching.

She was introduced to touch rugby at the age of 10 before she progressed to contact rugby, then sevens and 10s before finally to 15s when she was 16.

She went on to become a member of the squad that won the U20 Nations Cup in 2011 and spent the summer of 2014 playing in Canada for Strathcona Druids.

The lock started the first four matches in the 2016 Championship before picking up an injury which kept her out for 15 months.

She returned to international rugby with tries in consecutive matches against Australia and Canada in the 2017 International Women's Rugby Series in New Zealand in June.

She will look to add to her 17 international caps at the 2017 Women's World Cup.