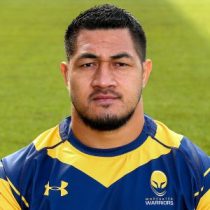 Fa'osiliva joined the team at Bath for the 2013 season from Bristol Rugby. Following a brilliant career in Rugby Sevens for Samoa, during which he was nominated for the 2010 IRB International Sevens Player of the Year, Fa'osiliva had a stint at French club Toulon before making the move to the West Country.

As a 19-year-old, Fa'osiliva represented Samoa at Under 21 level, and has since made several appearances for the senior Samoa team. As befits a former Sevens specialist, he has considerable speed, endurance and power, which means he is a potent threat in the back row.

On 13 May, 2016, Fa'osiliva was released from Bath with immediate effect due to a guilty plea for assault.

In August 2016, three months after being dropped by Bath, Fa'osiliva was picked up by Worcester Warriors ahead of the 2016/17 season.

Having made the move to Sixways in August 2016, Faosiliva became an integral part of the side, having already made 36 appearances for the Club.

The Samoan international committed his future to the club by re-signing for the 2017-18 season.

He November 2019 he signed a deal with Bedford Blues.