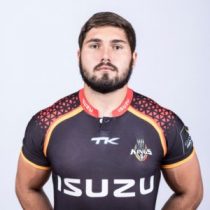 A young and promising hooker Alandre van Rooyen represented Eastern Province at youth level before he moved to Pretoria to represent the Bulls.

He made his first class debut in the Currie Cup Qualifying competition in 2016.

He will be looking to make his Currie Cup debut during the 2017 edition of the tournament.

Van Rooyen joined the Southern Kings in August 2017 on loan ahead of the sides debut season in the Pro 14 competition.