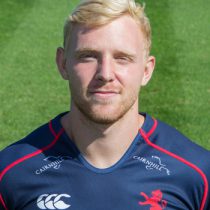 Coombes signed for London Scottish on an Academy contract in September 2014 after impressing in his pre-season trials at the Richmond based club.

He started in all 10 of Scotland under-20s' games in the 2014/15 season, wearing the number 11 shirt on seven occassions before occupying the outside centre berth for the final three ties of the World Rugby Under-20 Championship.

Coombes opened his Scotland under-20 scoring account in style, covering over 60 metres, in a mesmirising run, to cross the whitewash in the last minute of the 45-0 defeat of Italy in the 2015 Six Nations Championship.
His second try in the dark blue of Scotland came in the World Rugby Under-20 Championship defeat to Australia, when he scored the first points of the game.

In May 2017, Alec extended his contract at the Athletic Ground for the 2017/18 season. He had a breakthrough year during the season, featuring on 22 occasions scoring six tries in the process.

Coombes joined Glasgow's training group ahead of the 2019/2020 season.