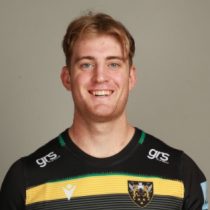 Educated at The Perse School, Coles was picked up by Saints at just 13 years old after impressing on the school stage.

Injury may have disrupted his progress during the 2017/18 season, but that didn’t stop Saints’ coaches recognising Alex Coles’ huge potential and offering him his first professional contract to join the Senior Academy the following summer.

Also playing his rugby at Shelford Rugby Club, the lock was awarded the Young Player of the Season by his childhood club before featuring for Cambridge RFC.

The towering lock made his first-team debut in the Premiership Rugby Cup in November 2018 before scoring his first try in Black, Green and Gold in January in Saints’ historic 111-3 win over Timisoara Saracens.

Coles’ work-rate and lineout abilities continued to impress Saints’ coaches and he made his Premiership debut just a month later, featuring in Saints’ final three fixtures of the 2018/19 campaign.

Coles has also earned international recognition, featuring for England Under-16s, Under-18s, Under-19s and was included in England’s U20 Six Nations squad in 2019.