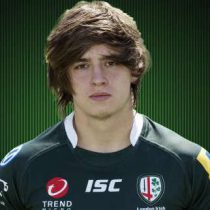 Gray led England U16, U18 and U20 to Grand Slams and signed his first professional contract for Newcastle Falcons at the age of 17.

He stayed with them until 2011, playing in eight Premiership matches, before appearing at Number 8 for two seasons with London Irish and adding another 18 Premiership games.

Gray has joined the England Sevens group for 2013-14, adding extra resources to the squad.

Born in Bishop Auckland, he was educated at Barnard Castle School, was player of the year for England in the U16 and U18 age groups and expanded his rugby horizons by spending six months in New Zealand with the Canterbury U20 squad.

In May 2017, former England 7's player Alex Gray became the first English rugby player to quit rugby to take up American Football, signing a one-year deal with the Atlanta Falcons.