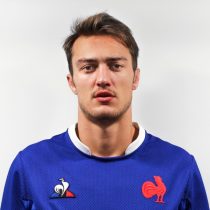 Alexandre is a former member of the Biarritz Academy. Roumat captained the French side to an U18 title in 2015. His father had won previously won the same championship 30 years prior.

Roumat signed a deal to join Bordeaux Begles for the 2017/18 season.

Son of former France second-rower, Olivier Roumat, Alexandre was first called up to the senior France squad ahead of the 2020 Six Nations following an injury to Dylan Cretin.