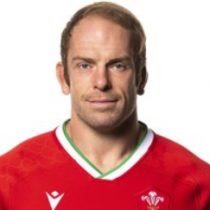 The back row turned lock has been an integral part of each Welsh success since his debut against Argentina in 2006. Jones’ first Welsh cap came off the back of impressive club form for the Ospreys, whom he made his debut for a year earlier.

In 2010, it was announced that Alun Wyn Jones would succeed Ryan Jones as the captain of the Ospreys. He has become one of Wales’ most important on-field leaders. The athletic lock is excellent at lineout time providing a secure ball and is prone to stealing one or two opposition throws per game. It is in his open-field work though that Wyn Jones really excels.

Named in the squad for the 2013 British and Irish Lions, his carrying, breakdown work and sheer work rate saw him make the test side, and in Paul O'Connell and Sam Warburtons absence in the final test of the series, Jones led the side as captain in the triumphant final test of the series. Alun-Wyn is set to feature for Wales in the Rugby World Cup as vice-captain and goes into the tournament with a good bit of form after a strong 6 Nations campaign.

In May 2021, Alun Wyn Jones was selected for the 2021 British and Irish Lions, it will be the second time he has toured to South Africa with the side and this will be his fourth tour overall.

The 157 test cap lock has played the last 9 tests for the Lions, starting seven times and captained the side in the final test in 2013 to seal the series win over Australia.

Lions #761, Appearances 20, Tries 2. In the Lions opening game against Japan Alun Wyn Jones suffered what looked like a tour ending injury and was replaced in the squad by Adam Beard but with just over a week before the first test against the Springboks he was announced fit to rejoin the squad after making a sensational recovery.