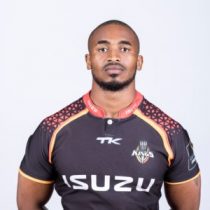 Ntsila come through the youth ranks at SWD Eagles and represented their U19 and U21 side.

He is adept across the back row and earned a spot in the NMMU Madibaz Varsity Cup squad in 2015.

Following some stellar performances with the Varsity Cup side he was included in the SWD Eagles Vodacom Cup and Currie Cup qualifiers squads.

In 2016 he represented NMMU in the Varsity Cup and was called into the Southern Kings side for their Round 16 clash against the Lions.

Ntsila debuted in that match and made one another appearance that season.

He was included in the Southern Kings 2017 Super Rugby squad and played in 11 of the Kings 12 matches before the June Internationals break.

Ntsila was called into the South Africa A squad for a two match series against the French Barbarians. He came off the bench in the first match and played the full 80 minutes in the second.

Ahead of the 2019 Currie Cup season, he joined up with the Sharks side in Durban but only made his debut at the end of September.