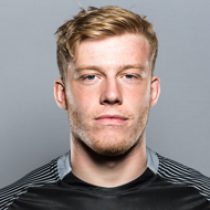 Davidson is a Scottish lock who is currently with English side Newcastle Falcons who lured him away from Glasgow Warrior, after catching the eye of Falcons while on duty for the Scottish under 20's.

Davidson has represented Scotland under 16 and 18 levels.

The young lock has been loaned to Glasgow Warriors ahead of the 2018/19 season and stayed with the club the following season after signing a two-year deal.

He was named in the Champions Cup squad and has made 5 appearances for Glasgow as of December 2019.