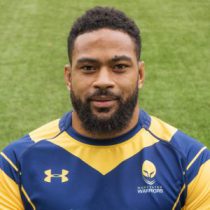 Born in New York City to Fijian parents, Durutalo returned to Fiji as a youngster and went on to captain Fiji’s Under 19 and 21 teams.

Durutalo made his Men’s Eagles debut in 2012 with three caps against Canada, Georgia and Italy.

The Fijian born US international has been an important player for the team since making his debut. His strength and power from rooks and scrums has given the States a huge advantage against their opponents, with their rivals wishing they had someone like Durutalo to call upon.

In May 2017, Ealing Trailfinders added USA Eagles international Andrew Durutalo to their squad for the 2017-18 season.

He made his debut against Canada in 2012 and played his most recent appearances for the Eagles against Tonga in San Sebastien in November 2016.

The 29-year-old has also represented the USA at sevens and he was part of the squad that took part in the inaugural rugby sevens tournament at the Rio de Janeiro 2016 Olympic Games.

He earned a scholarship to attend Hakuah University in Japan and later played Super Rugby for the Sunwolves in Japan for the 2016 season.

In May 2017, Durutalo was named in the USA Men's Eagles squad for the Emirates Airline Summer Series and Rugby World Cup 2019 Qualifiers this June and July.

In October 2018, Worcester Warriors signed the powerful USA international flanker to strengthen their options in the back row.

Durutalo has 22 international appearances under his belt, crossing the whitewash on four occasions, and represented the USA Eagles at the 2015 Rugby World Cup.

April 2018 saw him return to Ealing Trailfinders from Worcester Warriors on a long term deal.