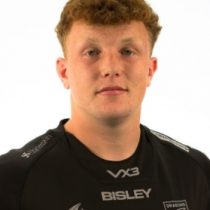 Talented young centre Aneurin Owen from Newport is tipped as one to watch by the Dragons management.

Owen enjoyed an outing for the Dragons A in the Celtic Cup against the Scarlets during the 2018/19 season and has enjoyed his experience with Ebbw Vale in the Premiership.

The former Ysgol Gyfun Gwynllyw pupil was a consistent performer for Wales Under-20s in their Six Nations campaign in 2019 and went to the World Rugby Junior Championships in France in the summer of 2019.

Owen was named in the Dragons first-team squad for the 2020–21 Pro14 season. He made his Dragons debut in Round 2 of the 2020–21 European Rugby Champions Cup against Bordeaux Bègles.

In July 2021, he was called into the Wales senior squad as an injury replacement for Leigh Halfpenny.