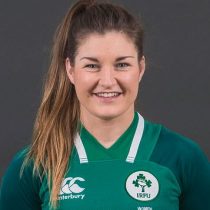 The Mallow girl comes from a sporting family. Her mother is the captain of the Ladies Mallow golf club, while her father is “a big GAA man.”

At 17, she joined the Mallow Rugby club in 2007. She was called up to the Munster U18s the same year and later progressed to the Munster senior squad. Under then Head Coach Fiona Steed, Caplice received a stern education on the true worth of the Munster jersey.

While playing in France, Caplice was wearing the number seven jersey for the B team which was once occupied by Steed during her playing days.

She later progressed to the Ireland Sevens team and was awarded her first cap with the Ireland 15s in their November Series Test against Canada.

Ahead of the 2020 Six Nations, Caplice has been named for the Ireland squad. She has had 8 appearances and will be looking to add to this total.