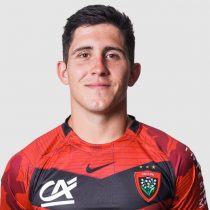 A native of Moflanquin, Anthony started playing rugby at the Entente des Quarte Cantons before joining the training centre of Agen in 2012.

Belleau represented France at various age-grade levels from U18 up to U20 level. He was a member of the 2015 U20 French side that competed in the World Championship & continued his development for the French U20 side in the 2016 U20 Six Nations.

In July 2014, he made the switch to TOP14 giants Toulon, joining their illustrious academy set-up.

Two years later, Belleau was highlighted on a list of 30 players with strong potential by the French Rugby Federation for the 2016-2017 season.

Belleau began to feature for Toulon at the conclusion of the 2016-17 campaign playing on 12 occasions, famously landing a last-minute drop-goal against La Rochelle to send Toulon into the 2017 TOP14 final.

He made his Test debut against the All Blacks in November 2017 at the Stade de France in Paris, starting at fly-half for the fixture.

In January 2018, Belleau was included in the French squad for the 2018 Six Nations, his first call-up for the senior tournament.

The flyhalf was also named for the 2019 Six Nations squad having had 2 previous 6 Nations appearances scoring 4 points.