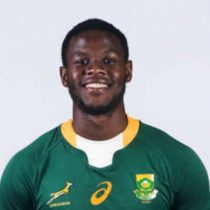 Fassi was born in King William's Town - now known as Qonce - in January 1998.

He is nicknamed 'The Weekend Special' as he shares the surname of South African singer-songwriter Brenda Fassie who sang the hit song.

Aphelele Fassi spent three years in the Dale College First XV as he made his first steps towards top-flight rugby. A standout at school level, he scored 15 tries in 23 games for Dale in 2018 with his form at the Kearsney Easter Festival earning him a bursary to the Sharks Academy.

Fassi, a decorated first-team player, could have given cricket a serious try but decided to persist with rugby and the Sharks have been the beneficiary of his electric running from the back.

Going to the same school (Dale College in King Williamstown) as Aphiwe Dyantyi, Fassi first broke through for the Sharks during the SuperSport Rugby Challenge in 2018.

He operated at flyhalf and inside centre at school and made his Super Rugby debut for the Sharks at fullback against Sunwolves in February 2019. A deceptively quick and agile prospect, Fassi secured his place in the Sharks' squad for the 2020 Super Rugby season following 15 appearances in 2019.

Boasting impressive speed and agility for a man of his height, Fassi is hard to miss on the pitch and has excelled at the highest level with the Sharks. Stellar form with the Sharks earned him a call-up to the Springboks squad ahead of the internationals against Georgia and the British & Irish Lions.

He made his test debut in the opening game of 2021 against Georgia starting on the left wing, scoring a try with his first touch of the ball