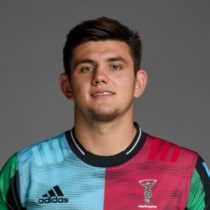 Joining the Harlequins Academy in 2015, White has made three senior appearances for the Club, and also played in the historic fixture against the Maori All Blacks earlier in the season.

The former Harlequins U18s and Epsom College captain represented his country at U20 level during the 2016 Six Nations.

After being a part of the Quins squad for the past four years, White signed a new contract with the club.