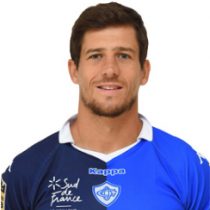 Battle started his career off at Perpignan in 2009, spending 4 years before joining Colomiers in 2013 in the PRO D2.

He didn't enjoy a successful spell under Bernard Jackman and joined Castres for the 2017/18 season.

As of December 2019, Batlle has 55 appearances for Castres and has scored 153 points.