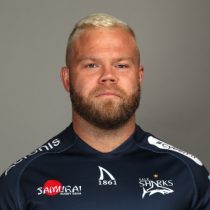 Lively hooker Armand van der Merwe, better known as Akker, was born in Vanderbijlpark and grew up in George where he played rugby for Outeniqua High School to win inclusion in the SWD Eagles Under-16 side for the 2007 Grant Khomo Week and their Under-18 side for the 2008 Academy Week and 2009 Craven Week competitions.

In 2010, he moved to Potchefstroom where he represented the Leopards and university side NWU Pukke. He was a regular for the Leopards U19 side during the 2010 Under-19 Provincial Championship competition, making thirteen appearances and in 2012.

He played Varsity Cup rugby for the NWU Pukke in 2013 and 2014, and made eight appearances and scored three tries in the 2014 competition.

He joined Racing 92 on a short-term deal for the start of their 2015–16 Top 14 season. Affectionately known as Akker he has a brother in pro rugby too, Duhan van der Merwe.

van der Merwe returned to the Lions ahead of the 2016 Super Rugby season and helped the side to a Super Rugby final where they were beaten by the Hurricanes.

In November 2016 he was named in the Barbarians squad that faced Argentina, Fiji and his home nation, South Africa.

Akker made his 50th Super Rugby appearance in the 2017 Super Rugby final against the Crusaders. On 6 August 2017 the Sharks announced that Akker will join the Durban based. van der Merwe then helped the Sharks to the Currie Cup Final and in December he signed a two year extension which will see him remain with the side until the end of the 2019 season.

'The Raging Waterhog' made a real impact in his debut season with the Sharks and earned his first call up to the Springbok for the 2018 June Internationals. He would make three appearances for the Springboks in 2018 and featured 15 times for the Sharks.

In February 2019, Sale Sharks confirmed the lively hooker would join the Premiership club on a three-year deal following the conclusion of the 2019 Super Rugby season.