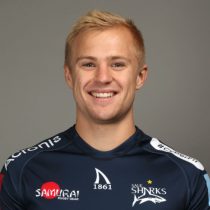 Arron Reed joined the Sale Academy at U15 level, having first played in the Tarleton RUFC U9 team.

Reed scored two tries off the bench, when England U18 beat Ireland 39-20 in the International Series at Parc y.

He has topped off his 2016/17 season when he was called up to the England U18 squad for the tour to South Africa in August.

In July 2017 he signed a senior professional contract with Sale Sharks.