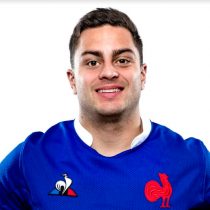 An exceptionally talent centre, Vincent grew up in a town in Montpellier and joined the club's Academy at the age of 14.

He went on to join Beziers' Academy during the 2016/17 season but returned to Montpellier to represent the senior side, something he admitted to being a dream of his from a young age.

Vincent was a member of the successful France U20 side that won the U20 World Championship for the first time in 2018.

He made his debut for Montpellier during the 2017/18 season before going on to lead France to back to back U20 World Championship titles in 2019 captaining the side in Argentina.

Vincent has since become a regular in the Montpellier starting line up making 16 appearances for the side in the Top 14 ahead of the 2019/20 season.

He continued to perform for the side featuring in all of Montpellier's first 13 games of the season by January 2020.

His form earned him a place in France's 2020 Six Nations squad.