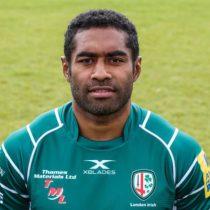 This winger’s confidence grew as the Super Rugby competition progressed. He scored four tries in a match against the Blues, joining a Super Rugby elite group of only ten other players to have achieved this, including former Chief, Sitiveni Sivivatu.

Fijian-born Tikoirotuma has played three ITM Cup seasons for Manawatu, aiding them to the final of the ITM Cup Championship in 2011 along with 2 Super Rugby titles with the Chiefs. He won the Heartland Player of the Year in 2009 with Wanganui.

In June 2014, Tikorotuma announced he would be joining Harlequins after his involvement with the Chiefs was finished. After only one season at the Harlequins he announced that he will leave and join London Irish from the beginning of the 2015 season. Asaeli has been included in Fiji's 2015 RWC squad.

Tikoirotuma performed well in the 2015 Rugby World Cup and has continued his form with London Irish. He has remained at London Irish as the fight their way back into the Premiership.

Played a key role in helping Irish achieve promotion back to the big time, Asaeli dotted down nine times during the 2016/17 campaign and stayed at the club during their relegation the next season and promotion the season after.