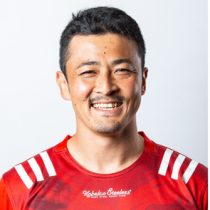 Two Top League titles and a member in the national team since 2011 makes Hiwasa an important part of the squad. One of the best performing 9's in the Japanese domestic competition he has always been Tanka's back up on the international stage.

Atsushi has made 91 appearances for Suntory Sungoliath, scoring 30 points since his debut for the club in 2010.