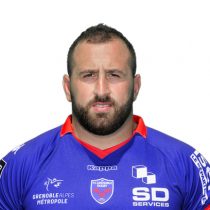 Beka Gigashvili is a rare breed of front-rower in the modern era with his ability to play in front three positions.

The Georgian front-rower represented Chambery in Federal 1 before signing with Grenoble in 2017.

He helped the side to promotion to the Top 14 and spent one season in the top flight of French rugby making 14 appearances.

He signed a three-year deal with Toulon ahead of the 2019/20 season.

In February 2021, his stay at Toulon was extended by a further three seasons after 22 appearances for the French club.