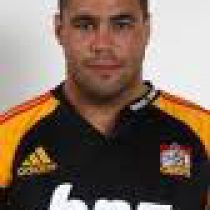 Ben Tu'umoe Paul Afeaki is former double international having represented New Zealand in water polo and rugby. Afeaki was a member of the 2012 Maori All Blacks tour and captained North Harbour for the ITM Cup Championship


A highly mobile, explosive forward was part of the New Zealand World Champion Under 19 and Under 20 sides. He represented the Chiefs in Super Rugby and North Harbour in the ITM Cup between 2010 and 2014 and also made one appearance for New Zealand in 2013.


Afeaki made his lone test appearance on 8th June 2013, replacing Wyatt Crockett with five minutes left during a 23-13 victory over France.


His career was cut short in 2015, at the age of 27, after failing to recover from a concussion sustained during the 2014 Super Rugby season.


Afeaki has since joined the Blues coaching staff as their Scrum Coach in 2018. He is also the Samoan forwards coach leading into the 2019 Pacific Nations Cup and Rugby World Cup