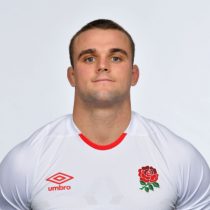 A Saracens' Academy graduate, Ben Earl was tipped for a bright future and started delivering outstanding performances for Saracens at a young age. Born in Redhill, Surrey, Earl was a member of his club’s junior academy, took A-levels in English, economics and French at Tonbridge School and has completed his first year of three at Queen Mary University of London.

He has captained Saracens U18, England U16 and Tonbridge School’s first team and established his leadership credentials. He was the players’ player for 2015/16 at Tonbridge and Player of the Tournament at the Reigate Sevens.

He made his Saracens debut in 2016, at the age of 18, and scored on his first start. He captained the senior side in the Anglo-Welsh Cup as well as starred in Europe including two tries against Cardiff Blues in 2018/19.

His impressive performances in 2017/18 earned him a nomination for Breakthrough Player of the Year while a call-up to England’s tour of South Africa followed but he did not make his debut. In 2020 he was named in the England Six Nations Squad.

After 55 appearances for Saracens, Earl signed a new 3-year deal with the club. Earl will spend the end of the 2019/20 season on loan with Bristol as well as the 2020/21 season before returning to Saracens.