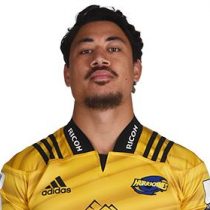 A tall, elusive and explosive runner, Ben Lam kicked off his professional career with Auckland and the New Zealand Sevens in 2012 having attended St. Peter's College.

The Auckland native and nephew of former Samoa captain Pat Lam, Ben set the World Sevens Stage alight winning the Glasgow Commonwealth Games silver medal in 2014 while also turning out for Auckland in the Mitre 10 Cup and the Blues

He was selected for the Auckland and Blues sides in 2012 and played 12 games for Auckland after making his debut in 2012 against Hawke's Bay.

He was a member of the Blues 2016 squad before injury struck in the preseason, also ruling him out of the New Zealand Sevens team’s Olympic Games squad.

He had limited opportunities at the Hurricanes during 2017 with just one start but in April 2018, the versatile player signed a two-year extension with Hurricanes, and emerged as one of the genuine standouts in that year's Super Rugby, crossing for a competition-leading eight tries.

Lam continued that fine form during the 2018 Super Rugby season as he set about breaking try-scoring records for the Hurricanes. By season's end he had crossed 16 times - the most tries scored in a Super Rugby season

February 2020 saw him sign a two-year deal with French side Bordeaux-Begles following Semi Radradra's exit at the club. Lam finished off his Hurricanes career in style notching up his 50th appearance for the side in game where the Hurricanes ended the Crusaders 36 game unbeaten home run with 34-32 victory.

He finished his Super Rugby career with 74 caps.