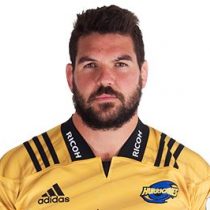 May made his Super 14 debut for the Crusaders against the Lions in 2007. After only one Crusaders appearance, he signed with the Chiefs for the 2008 season, making his Chiefs debut against the Blues.

May also has played in the ITM Cup for Tasman and Waikato, making his debut with the former in 2004. Of Ngāti Maniapoto descent, May played for the Māori All Blacks in 2007, 2008 and 2012

He signed with the Hurricanes in 2012, with whom he made his 50th Super Rugby appearance in 2013. The same season, it was announced that he had signed with Fukuoka Sanix Blues of the Top League for two years.

At the of the 2019 season, the evergreen prop agreed to return for another year after demonstrating his value on and off the field in 2019.

Although he had previously played for the Crusaders and Chiefs, it is at the Hurricanes where he has firmly established himself having played 89 matches in his 124-game Super Rugby career..

A hugely experienced prop who can play both sides of the scrum and a popular team man.