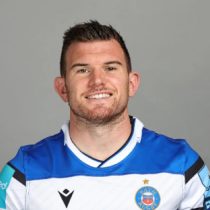 The quick-thinking little scrumhalf was fast-tracked into the Saracens squad after impressing the coaches while training with the club in 2011. He had been planning a season with Cambridge but ended up being drafted into the Sarries ranks and making his first-team debut during the campaign.

Since arriving at the club in 2011 as a relative unknown from Cambridge RFC, Spencer quickly established himself as a name for the future with a series of composed displays for the club with experienced duo Neil de Kock and Richard Wigglesworth side-lined with injuries.

He impressed in pre-season with performances against Toulon and Bedford Blues to earn a full-time contract and he continued to perform at the highest level in both the Premiership and Heineken Cup. It was a whirlwind year for the young scrum-half who made 21 appearances and also featured for England Saxons and was part of England’s Junior World Championship squad in 2012.

In October 2017, the scrum-half signed a new deal to remain at Allianz Park until 2020. During his 150 appearances for the Men in Black, he has helped Sarries to two Aviva Premiership titles, two European Rugby Champions Cup’s and an Anglo-Welsh Cup, with his last-gasp penalty in the 2015 Anglo-Welsh Cup final against Exeter Chiefs.

In June 2018 Spencer earned a call up into the England squad ahead of their tour to South Africa. Originally hailing from Stockport, the ex-Ivybridge College pupil has featured over 150 times for Saracens, proving influential in the club’s Anglo-Welsh Cup, Premiership and European successes.

Spencer was called into the England squad the week of the 2019 Rugby World Cup Final as an injury replacement for Willi Heinz. He started the game from the bench and made his World Cup debut in the defeat to the Springboks.

In July 2020, Spencer made the switch to Bath from Saracens.