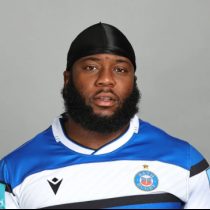 Growing up Obano's twin passions were football and hip hop. He played up front for Dulwich Hamlet and an unsuccessful trial for Fulham.

A former student of Dulwich College who was previously a member of the Wasps Academy, Obano impressed during his spell with Bath United in the 2015 season.

He also enjoyed a breakthrough 2016 season, with the powerful loosehead making 19 appearances in the Blue, Black and White in the 2016/17 campaign.

A dynamic presence in the scrum and with ball in hand, Obano continued his rise as one of the most promising English front rowers.

He since went on to make over 50 appearances for the club as he established himself as a first-team regular and was named the Most Improved Player’ and ‘Best Forward’ at Bath's 2017/18 Club's Annual Awards Evening.

In May he signed a new three-year deal with the club.

In December 2017, Obano received his first England call up for the 34-man Six Nations training squad.

He was called up for the Summer tour to South Africa in 2018 but was injured during camp. He played against Barbarians in summer 2019.

Obano was recalled into the England camp ahead of the final round of the disrupted 2020 Six Nations.