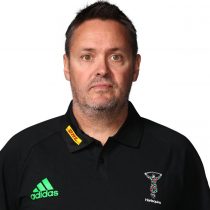 Millard has worked as General Manager with USA Rugby and Cardiff Blues and from his senior coaching roles at elite level with the Australian Sevens, The University of Sydney, Melbourne Rebels, Connacht, and Cardiff.

He won back-to-back Premierships in 2005 and 2006 with Sydney University, as well as the EDF Championship and a European Challenge Cup with Cardiff Blues.

Following Paul Gustard's departure at Harlequins in January 2021, Millard took over on an interim basis.