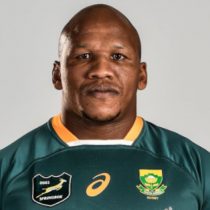 A robust and incredibly talented hooker, Bongi Mbonambi showed promise from an early age at St. Alban's College in Pretoria.

A two-time Bulls' Craven Week representative, Mbonambi first represented his country in 2009 when he was picked for the South African Schoolboys.

Mbonambi quickly made a name for himself with his accurate set-pieces, rock-solid defence and his impressive frame.

A stint with the Varisty team TUT Vikings followed after school as he also represented the Bulls' youth team before making his senior debut for the Bulls in 2012 against the Crusaders in Pretoria.

The talented hooker spent two seasons in the Varsity Cup in 2013 and 2014 while representing the Bulls in Super Rugby and the Currie Cup at the same time.

His continued rise up the ranks of South African rugby caught the eye of Western Province and the Stormers with the franchise securing his services in 2014.

Struggling for regular starting minutes at the Bulls, Mbonambi quickly secured a regular role with the Stormers and scored a try in debut match - a friendly against the Saracens.

Having nailed down a starting jumper with the Stormers, a test debut wasn't too far away with Mbonambi making his test debut off the bench in the Springboks' first test post the 2015 Rugby World Cup when he replaced Andrian Strauss against Ireland.

Following an impressive 2017 Super Rugby campaign with the Stormers, he signed a new three-year contract with the union. He missed the start of the Super Rugby season through injury but returned in time to be named in the Springboks June Test squad and heads into the matches against Wales and England with 14 Test caps.

Mbonambi traded starting roles with Malcolm Marx in the Springbok set up once Rassie Erasmus took over as the side's head coach in 2018 and by the 2019 Rugby World Cup Mbonambi was the side's starting hooker.

The hooker played in six of the Springboks' seven Rugby World Cup matches as the Boks won the competition in Japan with Mbonambi starting the final against England but his game was cut short due to a head knock.

He finished 2019 with a new contract with the Stormers as well as 36 test caps, seven test tries and a Rugby World Cup winners medal.

In June 2021, he signed a deal with Durban-based franchise, the Sharks, being named in South Africa's 46-man squad for the British and Irish Lions Tour.