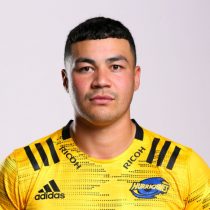 Born and bred in Manawatu, Brayden Iose was earmarked as a future star of the game whilst representing Palmerston North Boys’ High School.

Iose captained his schoolboy side and went on to represent the New Zealand Schoolboys side. A powerful runner and deadly tackler Iose signed for the Hurricanes at the age of 18 and trained with the Super Rugby side in 2016.

In 2018, he was included in the Hurricanes’ wider squad on a development contract and was rewarded with game time during the Brisbane Global 10s which took place in the Super Rugby pre-season. Unfortunately, injury struck.

He was been included in the Manawatu Turbos side for the 2017 Mitre 10 Cup. The young flanker put in a fine shift for the Turbos in 2017 and once again involved with the Hurricanes ahead of the 2018 Super Rugby season.

Throughout the latter half of 2020, Iose headed back to Manawatu for the Mitre 10 Cup season before signing a two-year deal with the Hurricanes in November.