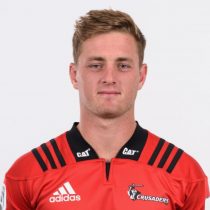 Born in Wanganui, Brett Cameron worked his way through the age grades there before relocating to Christchurch to join the Crusaders Academy
He was part of the Canterbury squad that won the Jock Hobbs Memorial National Under 19 tournament in 2015 and joined the Canterbury wider training group in 2016

A Cullinane College old boy, Brett Cameron went to Lincoln University after school where he was picked up by the Canterbury coaching staff and was named Cantebury's 2017 Mitre 10 Cup squad.

He made his debut against Hawke's Bay in round three and scored a try in a 23-point haul as Canterbury flogged Hawke's Bay 53-10.

The young first five has been described by the Canterbury coaching staff as a talented, confident and smart player with an outstanding kicking game.

Cameron was named in the Canterbury starting lineup for their semifinal against North Harbour in what was his 3rd start for the side. He scored 15 points and secured Canterbury's spot in the final.

He became first choice for the side in the Mitre 10 Cup and earned an All Black call up for the Japan leg of the November Series off the back of his performances.

Cameron also represented the Crusaders Knights team during their 2016, 2017 and 2018 seasons.

Cameron, selected for the Crusaders squad ahead of the 2020 Super Rugby season.

In July 2021, he called time on his career in New Zealand by signing a deal to join Japanese club Kamaishi Seawaves for 2022.