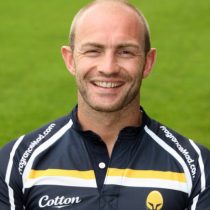 A former centre who also operated at fullback and fly-half, Calum MacRae has become a top level coach since his retirement. Hailing from the hometown of rugby sevens, Melrose in the Scottish Borders, and winning 13 caps himself on the IRB Sevens circuit, MacRae won 13 representative honours with Scotland A and played professionally with the Border Reivers, Edinburgh, Worcester Warriors and Venezia Mestre. Calum was a member of the Melrose Sevens squad who won the Kings of the Sevens title in season 1999-2000.

After age grade rugby he played for a four-year period on the World Sevens circuit along with playing in the Celtic league for the Borders. He played his final tournament for Scotland at the 2005 RWC Sevens in Hong Kong.

He was called up to the Scotland squad for the autumn tests in 2006 and for the 2008 Six Nations Championship.

During his playing days he turned out for Border Reivers, Edinburgh, Worcester and Venezia Mestre

Qualified as a physical education teacher, MacRae moved into coaching and worked as a skills and attack coach at Newcastle Falcons from June 2011.

In June 2014 it was announced that he would take over as the coach for the Scotland national rugby union 7's team for the 2014-15 season.

MacRae moved back to the XVs game after successfully leading Scotland 7s on the Sevens World Series, which saw the team win an historic first World Rugby Sevens Series title in London in May 2016.

In May 2017 he was announced as defence coach for Edinburgh Rugby.