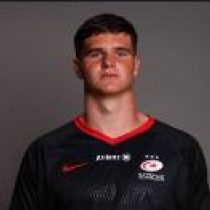 A 6ft10 lock, Cameron Boon featured for both Ireland and England at age-grade level.

A line-out specialist, Boon was part of the Saracens Storm squad who proved successful in the 2018/19 Premiership Rugby Shield.

A replacement in the final of the competition against Newcastle Falcons A, Boon has also represented Loughborough University.

He joined the senior Saracens' squad in 2019 and the tall timber of a second rower has been tipped for a bright future in England.