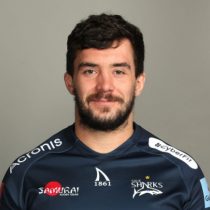 Neild joined the Sharks academy set-up in 2013 straight from Manchester Grammar School. Having begun as a hooker, a switch to the back row marked another stage in Neild's development.

In 2015, he made 23 appearances for Sale Sharks' first team, and was named joint Young Player of the Season.

In August 2016, he signed a new four-year deal at Sale Sharks.

Having begun as a hooker, a switch to the back row marked another stage in his development but – with Steve Diamond’s support – he looked to nail down the number two spot.