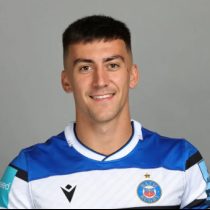 The son of 60-times capped former Sale Sharks and Scotland scrum-half Bryan Redpath, who captained his country 26 times, Cameron was born in Narbonne, France but has since committed his test future to England.

He represented England at U18 level and in his first six appearances sid, including four off the bench, Redpath scored a remarkable six tries.

His prolific performances led to a maiden appearance for England U20s in the 2018 U20 Six Nations, against Wales, where he continued his golden touch with yet another try.

At 17 Redpath became the youngest player to start a competitive game for Sale Sharks when he debuted for the club in November 2017.

His stocks grew after turning out for Sale and being selected for the England U20 side. He represented them twice in the 2018 U20 Six Nations and earned a call-up by Eddie Jones for the England tour to South Africa in June 2018, all at the age of 18.

In 2019, Redpath was included in England’s U20 Six Nations squad.

He left Sale Sharks for Bath in 2020 and has since become a regular in the side. He has shown off his versatility at the club playing in every backline position besides scrumhalf.

In January 2021, he was called up to the Scotland senior squad for the first time.