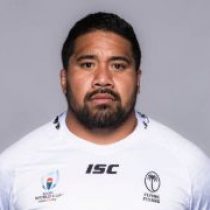 Ma'afu plays his club rugby for French outfit Provence Rugby in the Pro D2. The front row made his debut for Fiji back in 2010, and has since gone on to become a regular starter for his country.

Ma'afu has also been included in Fiji's squad ahead of the 2015 RWC.

He is no stranger to British rugby - he played for two years in the Championship with Nottingham and a further one at Cardiff Blues.

In February 2016, Ma'afu signed with the Northampton Saints where he played alongside his brother Salesi.

After 35 appearances at Franklin’s Gardens, Northampton Saints confirmed that the prop would leave the club at the end of the 2017/18 season.

Ma'afu side with Championship side Ealing Trailfinders ahead of the 2018/19 season.

Ahead of the new season, he signed with Northampton Saints as injury cover.