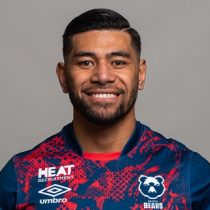 Piutau's career kicked into gear in 2010 when he was selected for the Tongan Under 20 team for the IRB Junior World Championship. The following year (2011) he was picked to represent New Zealand in their victorious U20 World Championship campaign, rising to prominence in that tournament as top try-scorer. That same year, he also represented the New Zealand Sevens team.

He was brought into the Blues squad to cover injuries at the tail-end of the 2012 season and proved his skills are up there with the best, claiming two ‘match of the match’ appearances.

Having represented both Tonga & NZ U20's along with the NZ 7's side, his natural progression was into the All Black set-up where he made his debut against France in 2013.

Piutau signed with Premiership side Wasps for the 2015/2016 season and was shortlisted for the RPA Player of the Year.

Piutau made 23 appearances for Ulster scoring 9 tries at the beginning of the 2017-18 season.

In August 2017, Bristol announced the signing of the utility back for the 2018/19 season on a two-year deal.

Piutau was influential in Bears' two victories in February 2020, against Northampton Saints and Worcester Warriors, and helped the club start March with a first derby win at Bath Rugby in 14 years.

He was then awarded Premiership Player of the Month after topping the overall Premiership Rugby charts in carries (27), defenders beaten (14) as well as metres made.