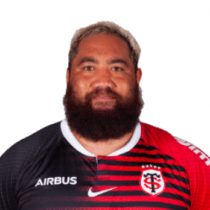 A former member of the Blues and the Auckland front row, Faumuina made a significant impact for his province since he made his debut in 2007, the same year he played for the New Zealand under 21 team that included All Blacks team mates Owen Franks and Ben Smith.

The burly front row plays most of his rugby at tighthead but his dynamism allows him to play loosehead at a quality level when called upon.

For a prop, Faumuina has dynamic footwork and his ball skills are unusual for a forward but he adds to the New Zealand squad greatly. His skills and power have kept him in the All Blacks sides going on to win the RWC with them in 2015

In 2017, he announced he would be joining Toulouse and would link up with the four-time European Cup winners after the Blues' 2017 Super Rugby season.

The 50 test cap prop had represented the Blues on 86 occasions and has scored 5 times ahead of the 2017 Super Rugby season.

In June 2017, after an incredible start to his 2017 Super Rugby season including two tries & three try assists and a win over the B & I Lions with the Blues, Faumuina was named in the All Blacks squad for the NZ Lions Series, where he would add to his then 46 Test caps.

His skills have already been beneficial for the club as he remains with the squad for the 2020 season.