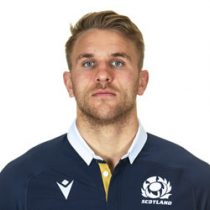 Chris had been part of the Falcons set-up since moving to Newcastle to study at Northumbria University to study Architectural Technology at the age of 18.

Harris was dual registered with Tynedale RFC in National League 1 and also had a loan spell with Rotherham in the Championship.

Harris joined Gloucester Rugby for the start of the 2019/20 season.

Since making his Scotland debut in 2017, Harris has accumulated 28 caps and become a key figure in the heart of their midfield.

An athletic and intelligent centre, best known for his defensive aptitude, Harris has thrived under Scotland head coach Gregor Townsend and defence coach Steve Tandy in the last 18 months

He has gone from strength to strength since, playing in all nine of Scotland’s matches in 2020 and all five in 2021 to date, including the 11-6 win away to England in February and the 27-23 win in Paris in March.

Chris Harris is rewarded for an excellent season with a maiden British & Irish Lions call-up this summer.