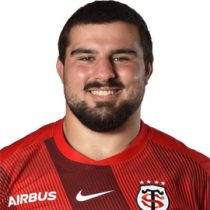 A powerful loosehead prop, Clement Castest started rugby at the age of 7 in the Cannet-Sainte-Marie club. He then joined RC Nîmes in 2008.

2011 saw Castest link up with the Montpellier Academy. He remained in the club's youth system and was selected for the French u20s for the Six Nations Tournament and the World Junior Championship in 2015.

After 2 difficult seasons with injuries, the prop tallied up 26 appearances for Toulouse during the 2018-2019.

He won the TOP14 with Toulouse during the 2018/19 season. Castets was called into the France squad in 2020 but did not make his debut.