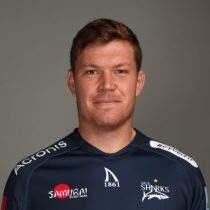 Cobus Wiese is a South African born flanker who represented Griquas at youth level. He has since gone through the ranks at Western Province and was called into the South African U20 squad.

Wiese provides an extra option at the line-out as he stands just short of 2 metres tall and weight 116 kg. Wiese's older brother Jasper represents the Cheetahs.

Wiese made 4 Super Rugby matches in 2017 and was included in the Stormers 2018 Super Rugby squad.

In July 2018, he was included in Springboks squad for the Rugby Championship. Following the disrupted Super Rugby season in 2020 he signed for Sale Sharks in the Premiership