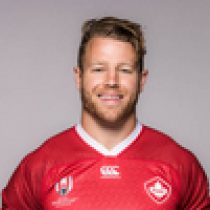 One of Canada's success stories since he made the progression up from the U20 side, Trainor made his Test debut in June 2011 against Russia and scored his first test try in the same match. He was a member of the 2011 World Cup squad and scored twice against hosts and eventual winners New Zealand. A hard-running centre or wing, Trainor has developed his skills on the Sevens scene before making the step up to the 15 man game. In 2015 he will make his second appearance at a World Cup, having been selected to represent Canada.

Trainor went onto represent Vannes in the PROD2 before moving to USON Nevers in 2018.

He has been included in Canada's squad for the Pacific Nations Cup in the build-up to the Rugby World Cup 2019 and currently started 20 times for Canada scoring 7 tries in 32 test matches overall.