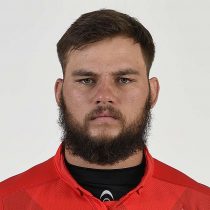 Schooled at Hoerskool Nelspruit in Mpumalanga, Conraad van Vuuren was a promising young front rower who represented the Pumas in the Grant Khomo and Craven Week tournaments.

After school, he attended the University of the Free State and turned out for the Shimlas in the Varsity Cup in 2015 and 2016.

Van Vuuren was included in the Cheetahs 2016 Currie Cup squad and made multiple appearances off the bench as the Cheetahs went on to win the competition.

Van Vuuren signed for the Bulls ahead of the 2017 Super Rugby season, this will be his debut season in the competition.