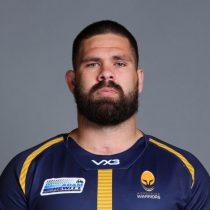 Born in Port Elizabeth, Du Preez represented the South Africa Under 20s side in 2011.

The former Springbok Academy star played in the Varsity Cup for NWU-Pukke and the Leopards in the under-19 and under-21 Currie Cup.

Du Preez previously played for Eastern Province Kings in South Africa where he made 23 appearances and crossed for 11 tries, as well as playing 16 times for the Kings in the 2013 Super Rugby season.

In the 2013/14 season, Cornell signed for Edinburgh in the Guinness Pro 12, he helped the Scottish team to win the Challenge Cup in 2015.

November 2016 he was called into the Scotland squad for the Autumn International Series as an injury replacement.

Du Preez was selected into the Six Nations squad in 2017 for Scotland.

In February 2018, Worcester Warriors announced that Cornell had signed on a two-year deal from the 2018-19 season.

He suffered a fractured larynx on his debut for Worcester against Wasps and was expected to miss the remainder of the season but defied medical opinion by returning to action at the end of March.

By the end of 2019, du Preez had started every Premiership match for Worcester during the 2019/20 season and then signed an extension to the end of the 2021/22 season.

Du Preez's consistent form for Warriors in the first half of the 2019/20 season won him a recall to Scotland's squad for the 2020 Six Nations.

He made his international comeback as a replacement in Scotland's 19-12 defeat by Ireland in Dublin in their Six Nations opener in Dublin in February 2020, adding to his collection of caps almost two years after he won his sixth.

He turned out again for Scotland against Wales during the Autumn Nations Cup in October 2020 and, after injuries suffered in the Scottish back-row stocks in the 2021 Six Nations, was again summoned by Gregor Townsend to fill in.

Du Preez left Worcester Warriors at the end of the 2020/21 season to join Top 14 club Toulon.