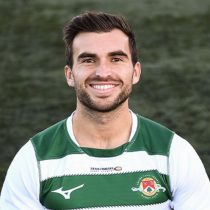 Hampson joined Bristol ahead of the 2014/15 season, having been named in the Championship Dream Team XV after an impressive 2013/14 campaign with Yorkshire Carnegie and has gone on to make 39 appearances for the West-Country side.

Hampson joined up with Wasps on a loan deal from Bristol in January 2016 after Joe Simpson was ruled out for an extended period.

He made his debut for Wasps coming off the bench against Newcastle at Kingston Park in R 18 of the Premiership and his impressive performances in matches and training saw him rewarded with a permanent deal.

Hampson's first full season at Wasps saw him make a further five first-team appearances and Hampson was instrumental in helping the A League side reach the semi-finals.

In April 2019, Ealing Trailfinders confirmed the signing of Hampson from Wasps for the 2019/20 season.