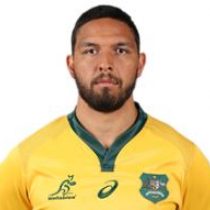 Born in New Zealand, raised in Perth, Rona played for Wanneroo Districts Rugby Club and was a member of the Western Force Academy before making the switch to rugby league in 2009.

He made his National Rugby League debut in 2014 and in three seasons has gone on to become one of the most prolific try scorers in the competition.

In August 2016, Rona was announced to have signed for the Western Force on a two-year contract.

Rona starred in 14 of the Western Force's 15 Super Rugby matches and earned his maiden call-up to the Wallaby squad ahead of the Rugby Championship.

He made his debut against the All Blacks and got onto the scoresheet. He made two other appearances for the Wallabies in 2017 and signed a deal with the ARU and Waratahs in December.

Rona played three times for the Wallabies in 2017 and scored on his debut against New Zealand, just a few months after joining Western Force from league side Canterbury Bulldogs.

Following 45 appearances for the club, Rona signed a new deal at Irish.